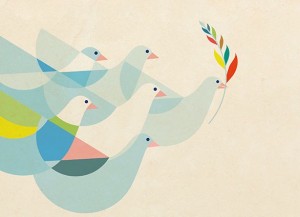 ☐  – $500 – Above benefits plus sponsor message announced during event and on airings of the TV Show.  Table at Event.  Four complimentary tickets.

* All sponsors listed on websites and in social media

** We are happy to create individualized sponsor packages

Should you wish to become a Signature Sponsor &/or Sponsor more than the Event, please contact me to create an individualized Sponsor Package for the Empowering Women project.

This event features a Special Guest Interview with:

Each year the International Day of Peace is observed around the world on 21 September. The General Assembly has declared this as a day devoted to strengthening the ideals of peace, both within and among all nations and peoples.

The International Day of Peace was established in 1981 by resolution 36/67 of the United Nations General Assembly to coincide with its opening session, which was held annually on the third Tuesday of September. The first Peace Day was observed in September 1982.

In 2001, the General Assembly by unanimous vote adopted resolution 55/282, which established 21 September as an annual day of non-violence and cease-fire.

The United Nations invites all nations and people to honor a cessation of hostilities during the Day, and to otherwise commemorate the Day through education and public awareness on issues related to peace.